Scuba divers used a giant inflatable balloon to raise a wagon used over a century ago to transport Welsh slate.

Members of Rhosneigr Sub-Aqua Club, Anglesey, were diving at Llyn Padarn, in Llanberis, when the wagon was found. It had been used to transport slate from the nearby Dinorwic Quarry to Dinorwic seaport at Y Felinheli. The wagon is on display at Llanberis Lake Railway’s museum. 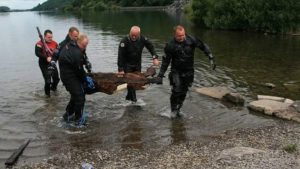