Welcome to the story of Purple Slate… in Wales. 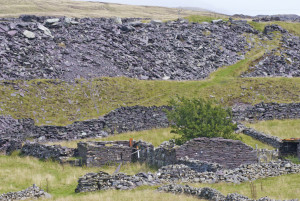 Our attractive, high-quality Welsh slate has been valued since Romano-British times. The 18th century saw the start of extensive industrial activity: between the mid 1800s to the early 1910s, slate products from our North Wales quarries were sent across the globe,, along with the associated technologies of quarrying and transport infrastructure. And, more locally, purple slate (from the nearby Penrhyn Quarry) was used on the Wales Millennium Centre in Cardiff.

Local author David Gwyn suggests the area of the Moel Tryfan uplands, and Nantlle Valley (immediately to its south) can be identified as ‘the historic heartland of the [slate] industry’.
His book ‘Welsh Slate: Archaeology and History of an Industry’ traces the industry from its origins in the Roman period, its slow medieval development and then its massive expansion in the nineteenth century – as well as through its long drawn-out decline in the twentieth.

The cultural aspect of this landscape has now been nominated for World Heritage status:

The proposed nomination for the cultural landscape associated with the industry will incorporate up to seven areas representing different forms and traditions of the slate workings, its transport and infrastructure, and the communities which made up its workforce.

Click here to watch a video of slate quarrying in the 1940s. (Courtesy of the British Film Insititute)

Click here to watch ‘The Roof over your Head’ – the hazardous, hair-raising journey of Welsh slate, from subterranean rock to the world’s rooftops. Documentary1937. 19 mins (Courtesy of the British Film Insititute)