The Ladies of Slate 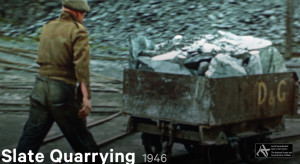 In the late 1700s, the male-dominated Penrhyn quarry suddenly resounded with some  aristocratic-sounding female titles – including ‘Empress’, ‘Broad Countess’, ‘ Viscountess’, ‘Small Lady’, and ‘Narrow Ladies’. However, it was not a new social order – rather, a new system for standardising slate roof tile sizes.

General Warburton, owner of the Penrhyn estate, introduced the new classification to help organise the growing number of slate sizes resulting from increased slate craftsmanship, and an expanding market. Previously, as far back as the 1550s, slate had come in two basic sizes, ‘singles’ and ‘doubles’.)

The new ‘naming’ system was even mentioned by that intrepid Victorian traveller, Bradshaw, in his journals. The system lasted for almost 200 years; slate tiles are now measured – perhaps less romatically – simply by length and width.

The Penrhyn quarry featured in this BFI film shows how toiling in the Welsh slate mines was incredibly hard work in the 1940s – especially by our 21st century standards. However, the quarry was eventually known for providing improved conditions and pay.